...the sources reveal a composer very much admired by his court, colleagues and contemporaries, and who was ready and willing to embrace changes and accept new challenges - all, it seems, with a minimum of fuss. (Johannes Agustsson)

Zelenka came from Bohemia to Dresden in about 1710, when he was around 30 years old. Apart from a possible trip to Venice, a 2-year stay in Vienna studying counterpoint under J.J. Fux, and probably occasional trips to Prague, Zelenka was to spend the rest of his life in Dresden. 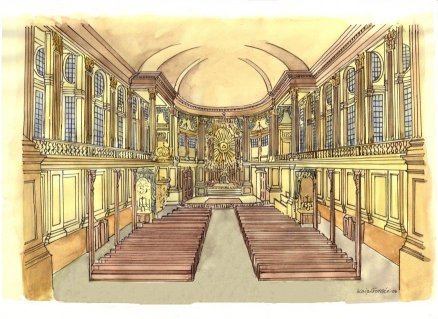 Sketch of the interior of the original Catholic Court Church in Dresden, looking east from the organ gallery. The inner part of the church as seen here was roughly 36 metres long and 17 metres wide.

Zelenka's employer in Dresden was Elector Friedrich August I (August the Strong) of Saxony, who had converted to Catholicism in order to become King of Poland in 1697. He had the theatre from the 1660s within the Dresden palace converted into a Catholic church in 1707-1708. This would have made it possible to hold Catholic services very much on home ground in a society that was predominantly Lutheran. 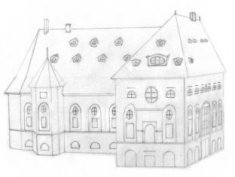 Pencil sketch of the church, after a partial drawing from 1709.

Brief history of the church

The building (built between 1664 and 1667) was joined on to the court buildings. In the conversion from an opera house/theatre to a church, the direction of the seating was reversed to face east so that the wider west end (originally the stage) became an entrance. The organ gallery with its large end-window was located above this entrance and accommodated most of the musicians. Some of the orchestra probably spilled over into the galleries running along the sides of the nave of the church. Thus, the music was usually performed from the west end of the church.

The Catholic Court Church is well portrayed, although only partially, in Bellotto's painting of the Zwinger (see below). A painting of Bernardo Bellotto (c. 1752) showing the Zwinger and the original Catholic Court Church in Dresden.

The church is the white building at the centre, attached to the court buildings (upper left).

The building was re-converted to a Ballhaus in 1755 when the new cathedral was finished and when the original Ballhaus from 1589 (situated immediately south-west of the church) was to be closed. The building was given a rectangular ground-plan and a classicist façade in 1802, and the shape of the roof was also changed, which meant that even the main features of the original theatre/church building (apart from its position) were difficult to recognize. It was used as an archive of the court during most of the 1800s.

The Catholic Court Church building was finally demolished in 1888-1889 to make way for the tramway which still runs past the court buildings – see the images below. 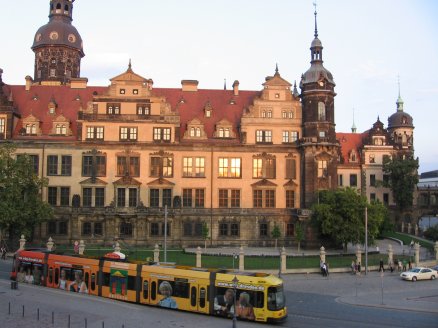 A modern photograph of the court buildings (renovated after the fire-bombing of 1945) showing the space that the Catholic Court Church once occupied. It extended from the corner of this building at an angle. The western face of the church with large end-window was a few metres further back from the position of the tram, at an angle midway between that of the tram and that of the court buildings. 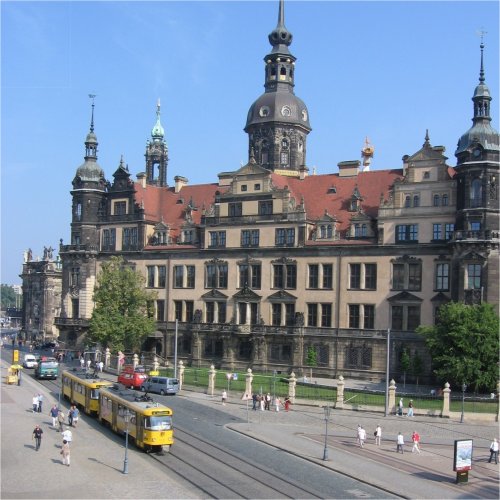 Another view showing the “new” cathedral from 1752 to the far left. 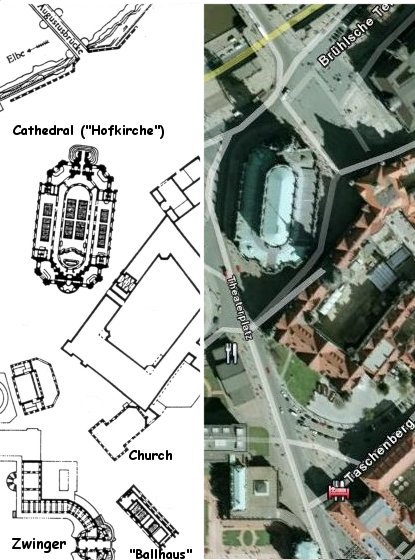 Left: Plan showing the positions of the original Catholic Court Church (demolished 1888-1889) and the “new” Cathedral (Hofkirche), which was inaugurated in 1752. Note that the original church was tiny in comparison, as it covered only about one quarter of the ground area. Right: Recent satellite picture for comparison, showing routes etc. (courtesy of Google Earth). 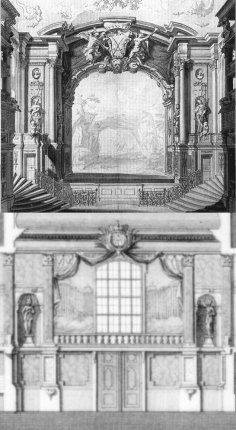 Looking west. Top: View of the stage as renovated in 1691. Bottom: In the conversion to the Catholic Court Church, some of the space that the stage had occupied was used as an organ gallery at the back of the church. The visible part of this gallery was only about 11 metres wide, but this was where most of the orchestra and singers were placed. 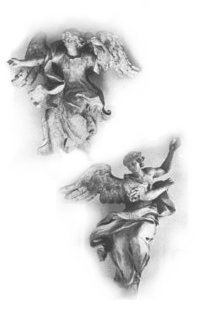 Appearance of the Royal Archive, which stood in front of the Court buildings from 1802 to 1888. Note its rectangular form; this contrasts with the T-shaped form of the original Catholic Court Church from which it was derived (see plan above).